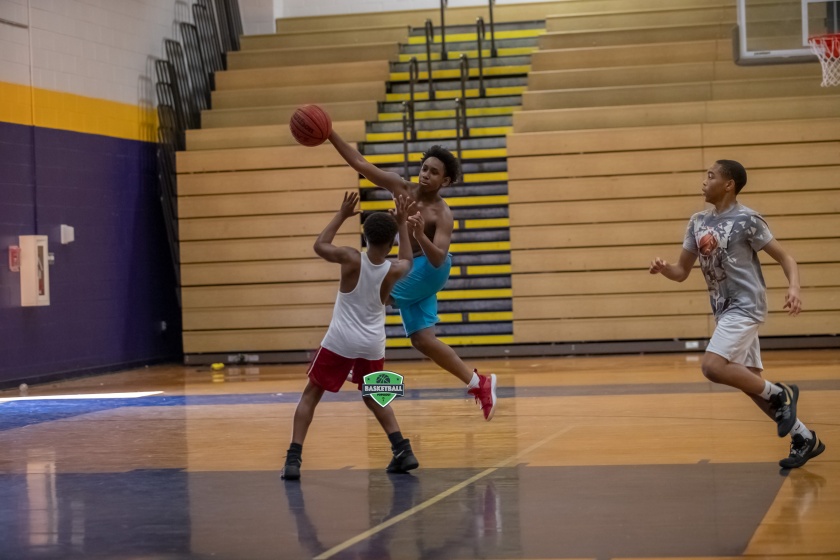 We all we got.

In a time when the social climate is stirring like a hurricane off the coast, threatening to demolish any and everything in its path, it’s great to see our youth, who’ve navigated their way through the current times (and system so to speak), giving back to the community in which they came.

Jaylon Bardley from Columbus, Mississippi is doing just that. Staying rooted in his neighborhood to charter a path toward success.  Who better to give back to our young soldiers and impart knowledge than someone who has lived that life.  It’s a flip side to that coin as well, considering our youths must be open to learning from those who come back and are willing to share knowledge of the game.  Many times that knowledge for inner-city youth has a lot to do with becoming successful in the game of life you feel me.

Q – Tell us about your history as a player growing up in Mississippi.

A – There isn’t a lot of exposure for young athletes growing up in Mississippi. The best exposure a kid from Mississippi can get is playing for a sponsored AAU team. I was fortunate enough to play for a couple of sponsored AAU teams (Da House) and (Jackson Tigers). I played for (Da House) 8th and 9th-grade summer. I played for the (Jackson Tigers) 10th-grade summer. Playing for those AAU teams showed me that the talent level in Mississippi is low compared to most states. After competing with some of the best talent in the country, I was prepared to take on high school hoops in Mississippi. I went to Columbus city schools all the way up until 10th grade then transferred to New Hope high school.  Statistically, my sophomore season at New Hope was my best year. I averaged 15 points and 4 assists and we won our district. My junior and senior seasons at New Hope taught me the importance of getting the most out of your teammates. Even though my senior campaign didn’t go as I would’ve wanted it to, I was blessed enough to get a scholarship to play at East Central Community College in Decatur, Mississippi. My time at East Central was vital for my growth as a player and a person. My Freshman year I didn’t get too much playing time but I made the most out of every minute. The first half of my Sophomore season was up and down for the most part. I had some good games and some not so good. The second half of my Sophomore campaign was a good one. We won games people didn’t think we could win and we made the state tournament and the regional tournament also. We came up short in both tournaments but it was a great experience for myself. I made the all-region team and I got an offer from an NAIA school (Blue Mountain College) out of Blue Mountain, Mississippi. I graduated from East Central with an associate’s degree. My time at Blue Mountain was also another good learning experience. My time there taught me to control what you can control. There were a lot of things going on at the school that I had no control over but through it all, I had a very good year. I averaged about 18 points and I was second-team all-conference. I transferred to another NAIA school Philander Smith College in Little Rock, Arkansas for my senior season. The first half of the season was very tough but I stayed positive. The second half of our season was much better. I was fortunate enough to make another all-conference team. I graduated from Philander Smith College in May 2019 with my bachelor’s degree in Physical Education.

Q – As a 1st-year coach, what’s your philosophy behind the game of basketball? What are you going to bring to the table that’s fresh, different or unique?

A – As a first-year coach, I know that this year will be about me learning a lot more than anything. I plan on being a coach that gets the most out of the players and also maximizing what they do best. I know it won’t be easy but I’m willing to be patient with my players. Also, having good strong relationships with each individual player will help a lot. I want my players to play the game of basketball the right way and have fun doing so.

Q – For players and coaches, what are some of the disadvantages/advantages of playing in a town like Columbus, MS?

A – While playing/coaching in Columbus your accomplishments get overlooked by many. It has been that way for as long as I’ve been taking the game of basketball serious. But I look at that as an opportunity to be the first in this area to put our young athletes on the map. This summer I worked with a lot of the talent in Columbus, Mississippi and I must say we are slept-on big time. We have numerous athletes on the college level handling their business. Slowly but surely I plan to get our athletes in the city of Columbus seen.

Q – Who were and are your favorite NBA players and how have they influenced your game?

A – As a kid, my favorite player was LeBron James and he still is to this day. When I saw how focused he came back after losing to the Dallas Mavericks in 2010, it showed me that with hard work and dedication you can always prevail. But the player who influenced my game the most would have to be Kyrie Irving and I say him because he has never been the tallest or most athletic. His skill level is so far above the average Nba player that it is scary and I study and mimicked him since his days at Duke.

Q – What’s different about the game of basketball that you see changing for players your age and of your generation?

A – The game has changed a lot since I first started taking the game of basketball serious. When I first started playing most coaches in my area thought that your offense should be run through a big man no matter their skill set. Nowadays coaches see that the game has changed and the good ones change their styles for the better. The game of basketball today is more of a ‘positionless’ game meaning that all 5 guys on the floor can do whatever it is they do best, no matter the size of the player or the position the play.

Q – Where do you see yourself in 5 years and how do you plan on getting there / reaching your goals.

A – 5 years from now I hope to have leveled up in the coaching business whether it’s a high school head coaching position or college position. But each year I plan to grow as a coach and as a man.

Remember it’s not where you from it’s where you at.  In this case, both make a huge difference and a deciding factor in the lives of kids who have limited options and resources, simply because of the State they grow up in.  Getting overlooked simply because the bright lights aren’t shining on your particular state is a tough pill to swallow for someone who is as passionate about the game of basketball as you are.

It’s great to see coaches like Jaylon making a true impact on the youth in his community. Good luck this season and beyond as you develop into one of the hottest coaching prospects to ever Rep’ the State of Mississippi. We appreciate your loyalty and commitment to the next generation of Hoopers. Hopefully for many, many years to come.