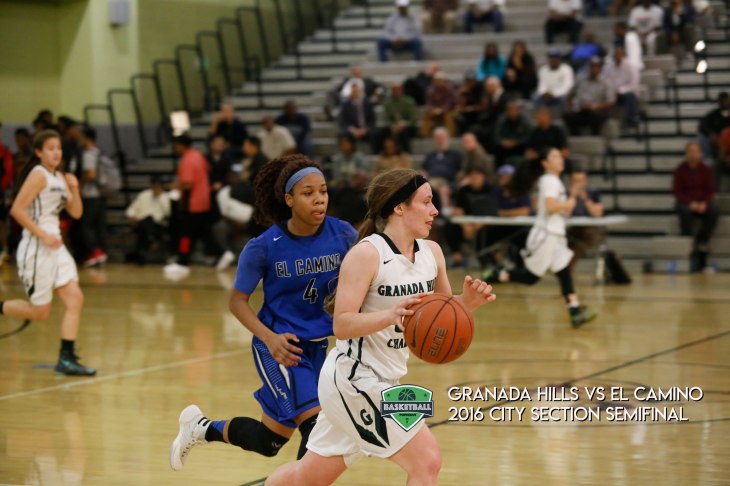 Could we be looking at a CIF LA City final preview?

Two city section powers collide for bragging rights and a chance to stake their claim as the team to beat in the CIF LA City Section girls basketball hoops arena.  Both teams come in with a 4-0 record during West Valley League play, as well as holding their own against stiff CIF SS opponents outside of league play. Granada Hills Charter has jumped off to a great start.  Going 18-4, capturing a piece of the pie during the Nike TOC, and balling out against CIF big-wigs such as Sierra Canyon (55-54L) and Serra (60-55L), look for GHC to continue their on-court execution this evening under head coach Jared Honig, relying on Senior PG Emily Mitchell to be the spark-plug that keeps the engine running.  This young lady can pull the bow and arrow, find her teammates in traffic, and become special when they need her the most…in crunch time.

El Camino comes in riding a five game winning streak after knocking off Harvard Westlake 53-49, January 4, 2018.  SR PG Kianna Hamilton-Fisher is special, as first year coach Rai Colston has tweaked his line-up, moving Kianna to the PG position. She now controls the tempo of the game, using her basketball IQ and skill-sets to get (and keep) her teammates involved throughout the course of the game, while showing the ability to maneuver her way to the rack, stop and pop for mid range shots, and pull the trigger from deep.  The complete package indeed.  She just might be the X-factor tonight along with a few other pieces such as senior forward Kyra Jacks and sharp shooting junior guard Gillian Block.

El Camino Real executed to perfection in their win against Harvard Westlake on the road, showing the ability to develop a game plan that kept Harvard Westlake at bay and on their heels.  Coach Colston and his staff will need another sound performance from their players as well as themselves, in order to come away with the W on the road against a stout GHC ball club.

A few clips of Granada Hills Charter during their 55-54 defeat against Sierra Canyon December 7, 2017.  We spotlight Super Senior Emily Mitchell as she pulls the bow and arrow from long range and becomes special during crunch time.

PopScout
Where Legends are Born.

Popscout is a scouting service providing athletes a one-stop-shop for all their recruiting needs. We provide student-athletes with photography, videography, and recruiting services. We're built from the ground up to provide you with a platform to develop your game. View all posts by PopScout