The 2017 Tarkanian Classic gave teams a chance to see just how good they could perform, on a truly big stage.  It was also a time to see how team chemistry is developing and whether or not coaching staffs need to ‘tweak and adjust’. For a few squads, help is on the way – in the form of sit-out period transfers.  Let’s take a look at a few CA teams who stood up and stood out during the 2017 Tarkanian Classic, played in Las Vegas  December 19-23, 2017.

Rancho Christian (9-1)  3-1   (Current Record / Tournament Record)
Great tourney for the Mobley brothers and Head Coach Ray Barefield.  They go 3-1 for a solid 4 days of play, knocking off Pasadena (CA) 56-48 on the final day.  Definitely looking forward to RC going to work in the upcoming Classic@Damien tourney December 26-30, 2017.  Should give us an indication of how special these young men are developing into.

Compton Dominguez (6-3) 4-0
Dominguez continues to show one of the best coaching jobs on the east side and for all sides.  These kids are learning how to compete on a big stage, preparing them for the rigors surely to come at the next level.  The Dons defeated Riverside Poly 54-41, capturing the ‘Ship of the Eastbay Division. The Dons have played teams close all year and should be recognized.  Look for them to crack a few polls come 2018.

Westchester (9-2) 3-1
Westchester continues to shine under legendary Coach Ed Azzam, defeating two IE squads while in Sin City (Chino Hills & Corona Centennial).  The Comets have a number of players, on any given night, willing to step up to the plate and knock a few balls out the park. #24 Jordan Brinson 6-3, G (above) continues to develop into a solid D1 recruit.

Culver City (5-4) 4-0
Culver City won its division ‘Ship going 4 -0 during their stay in Sin City.  Tevian ‘TJ’ Jones turned up, winning Tourney MOP.  Great job for Culver City and Coach Morris, as he continues to develop kids under his – and Pops’ – philosophy of play.

Corona Centennial (Record N/A) 2-2
Solid group of young soldiers becoming battle tested out here family.  Look for Corona Centennial to be too much to handle for most clubs who’ve been playing cream puff schedules.  Their young players are developing a solid feel for the game under head coach Josh Giles. 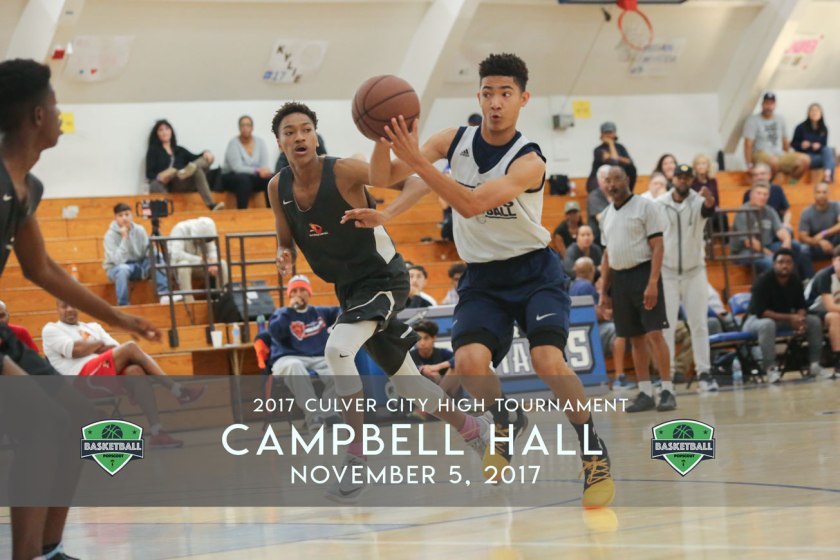 Campbell Hall 4-0
Great divisional tourney championship for CH.  Looking for them to continue their success back in CA.  We like the development of their guards and solid overall team play.  Stay in the lab young soldiers.

Riverside Poly (10-1) 3-1
The new kids on the block showed why they ‘ll be one of the favorites during CIF SS playoff play come February 2018. The Bears hold a record of 10-1, with a #20 CA State ranking per Maxpreps.  Next up:  UA Holiday Classic.

PopScout
Where legends are born