Had a chance to preview some high school hoops this past weekend at St. Bernards High School Fall League.  Didn’t get a chance to see all of the action but for what we did see, it’s definitely going to be an exciting year on the CA BBall Hoop Circuit during the 2017-18 campaign.  A few soldiers, who’ve been in the lab, stood out from the rest.  It’s so early that we don’t even have names for most of them.  Game recognize game, nonetheless, as we critique play during week one of the St. Bernard Fall League. 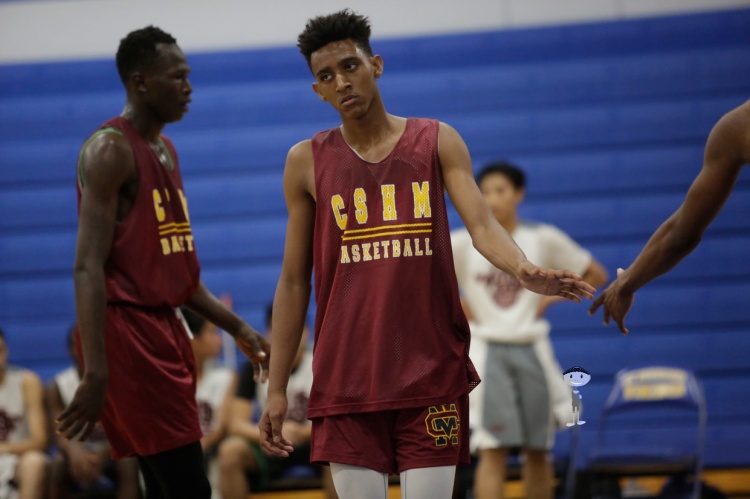 Dynamic Guard with impressive feel for the game.  Has enough swag to carry his own and be among the top guards who are flying under the radar in the State of CA. Has developed that killer instinct mentality that allows him to get to the rack and finish.  Good bounce for a PG and natural leadership qualities on the court. With his complete all around game, should be a good piece that will have CSHM – and their new head coach –  back in the mix indeed.

High scoring guard with the mentality and mindset to take his game to the next level after lettering for UCLA.  Solid defender who loves to sit on the defensive end while making steals and pushing the rock on the break.  Wet Ball from long distance, minimal mental mistakes, and goes to the rack with authority.  Will need to keep developing his point guard mentality to push his game to 5 star status by seasons end.  Definitely on the McDonald’s watch list and preseason consensus All-American.

We like the patience, confidence, and leadership of this young man.  Didn’t get a chance to touch base with him but his game spoke volumes.  Solid PG who may lack size but his character on the court make up for it.  Floor general who seems to enjoy the PG duties, which will make many St. Bernard fans happy campers come tip off time.  Must keep developing that scorers mentality to keep the defense honest but a great addition to any back court running mate.

Active swing-man who plays above the rim.  Tweener(6’5 -6’7) who will need to fine tune his game for the next level but all the intangibles are there.  Great feet, solid feel for the game, and high character player who loves to run up and down the floor.   Needs to show consistency from midrange and beyond to become a serious D1 recruit.  Cantwell is as athletic as they come. Appears as though their new coach is letting them ‘gel’ while developing a working relationship on the court. Look for them to be one of the high flying teams to watch in 2017-18.

This young man has played in many big games since starting for BM as a sophomore.  Has grown an inch or so and appears to be a solid D1 recruit.  Loves to lock down defenders and create havoc on the defensive end.  Will need to develop his stroke from long range and work on concentrating and finishing at times in traffic.  Makes good decisions with the rock as we look for him to show supreme confidence and swag on the court. Very solid young man who will find a solid spot on someones D1 roster by seasons end.  Look for BM and Co. to be right back in the swing of things come playoff time.

Active guard who shows flashes of true star status.  Can get buckets from all three levels of the court, while still keeping his teammates happy and involved with solid passing and unselfish play.  The verdict is still out on the young man as we eagerly wait to see how he performs against the top teams during the fall league.  High potential player definitely on the radar you feel me.

PopScout
Become Great at what you do.