Just when you thought the Chino Hills basketball team would be in disarray next season by losing their star PG Lonzo Ball, who will be moving on to play for the Bruins of UCLA  (one and done in our eyes), the team appears to be locked and loaded to stake their claim next season and grab a piece of the pie.  Although no one will ever replace the “Magic Johnson like” prototype in 6’6 PG Lonzo Ball, Chino Hills does seem to be looking solid for their 2016-17 campaign.  PopScout was watching film and evaluating their roster to see how much potential they really have. 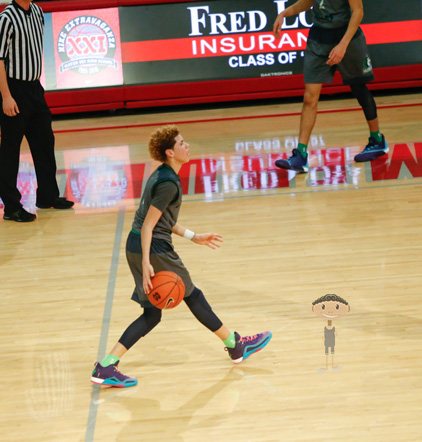 Let’s start with the backcourt and LaMelo Ball.  The 5′ 10 freshman guard has been primarily a shooter his freshman season and boy does he let it fly. Good Lord. But no one really knows if he’ll be able to handle the responsibilities of the Chino Hills’ vacant PG position next season.  Except maybe Melo himself. It’ll be interesting to see how much this young man grows and if he reaches the height of his two older brothers. Waiting on those growth spurts Bro’.

PopScout’s got film on Chino Hills this season, squaring off against Bishop Gorman at the Mater Dei Nike Tourney and Foothills Christian at the Sierra Canyon Tourney  – where Melo handles the rock a bit, but doesn’t really run sets for his team. We would’ve liked to have seen him get the team into an offensive flow from time to time, by bringing the rock up and initiating the offense after buckets. It’s not all about you Zo…just kidding. I wish we could’ve also seen more of Zo this year at the SG position thus allowing his baby bro’ some real world work experience running the point – and in turn giving Zo invaluable experience at the SG position.  Remember, we become great at what we do. Running the SG position would’ve allowed him to pick up on additional nuances of the game.  PopScout feels, nonetheless, that Melo has what it takes to step in and take the bull by the horns.

6’6′ JR SG LiAngelo Ball is another interesting topic.  We wonder just how long he can get away with a two prong approach:  working down low with what most would say limited size and shooting 3ptrs – not quite sure of his season percentage from the 3 point line.  We’re hoping that during the summer this young man handles the rock as much as possible and incorporates a few PG traits into his game.  If Chino Hills is going to be a serious threat next season, then LiAngelo will be forced – during game situations – to shoulder much more of the ball handling responsibilities.  Interesting to see how much this young man goes to the lab and works on his overall game this summer.

We’re anticipating a great senior season for 6’4  Forward Elijah Scott. Barring injuries and/or academic issues that would prevent someone from being on the court, Eli should be a beast. PopScout thinks he’s a 4 Star Dapper Dandy who can play 4 positions on the court.  The kid hasn’t been spoken about too much.  He lives under the radar in the shadows of the Ball Brothers.  His nice all around game will help tremendously next season with the loss of Zo. We like to refer to Eli as a workhorse, doing all the dirty work for his team.  Look for this kids’ stock to rise during summer NCAA viewing periods.

6’9 Freshman Center Onyeka Okongwo, after a good showing against Bishop Montgomery during The Nike Fairfax Tourney, has gotten on the radar.  Chino Hills might just have the best two freshmen players in the state of Cali, when it’s all said and done, for the Class of 2019.  We haven’t seen enough of this young buck to decide on his upside. We do like his court awareness, feet, and the way he finishes around the rim. With three more years of court experience and lab work under his belt, we may be looking at another Dapper Dandy.

Chino Hills will look to advance to the Championship game of the CIF Southern Section Open Division. They must get by Mater Dei in a Final Four match-up Friday, Feb 26, 2016 in front of their home crowd.  The joint will definitely be jumpin’.

Don’t sleep on Mater Dei, who still, some say, holds the distinction as the team to dethrone with Head Coach Gary McKnight still pulling strings after so many years of winning State Championships. Unfortunately, Mater Dei will have to bring their A+ game to upset Chino Hills while Zo is at the helm.  We just don’t see Mater Dei with enough fire power to knock off The Ball Bros.and Co. Unless Gary McKnight is able to pull a rabbit out of his hat.

Good luck to both squads.
PopScout:  Chino Hills by 20